The BBC recently released the results of a 12-month investigation entitled ‘The secret trade in baby chimps’. It was on World Service radio and television repeatedly all day the 30th of January and was accompanied by an excellent story by David Shukman and Sam Piranty on the BBC News website. Shukman has followed up with a thoughtful, more analytic story on how humans treat great apes in general and a 30-minute documentary ‘The Chimp Smugglers’.

The public reacted viscerally and vociferously to the story and to the heart-rending video of little Nemley Junior, an infant chimpanzee rescued during the sting. My Facebook pages were full of comments expressing outrage, anger, shock, sadness. Born Free’s president Will Travers blogged on National Geographic’s Voice for Wildlife about it.

But why did BBC call it ‘the secret trade’? It’s not a secret. Apparently to them it was, but the UN report Stolen Apes was released almost four years ago and it revealed in detail the trafficking in little ape babies for use as pets and money-makers in zoos and safari parks. PEGAS has published several articles on it in Africa Geographic, Mongabay.com and elsewhere, and Agence France-Presse, Al Jazeera, Al Arabiya, Paris-Match the Canadian Broadcasting Corporation and others have reported on it, with The Dodo even publishing many of PEGAS’s disturbing photographs of the stolen ape babies.

PEGAS was even involved in a sting very similar to the one that the BBC pulled off, which so far has netted three people involved in trying to sell two orangutan babies that were smuggled from Indonesia to Thailand. AP posted a brief video story on it and the Bangkok Post reported it, but most of the large news outlets like the New York Times, CNN and Sky ignored it, even though technically it was a bigger story than BBC catching two traffickers and one baby ape. The BBC actually posted the AP video, but made nothing of the story. 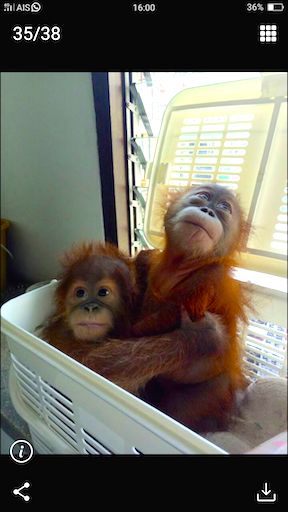 The infants after rescue by the Thai police

The way the BBC covered the Abidjan sting story, which involved repeated headline news announcements all day 30th January, a long news video clip, two comprehensive written stories and a 30-minute documentary, not to mention discussion of the story on other BBC programmes, resulted in the massive public reaction.

A huge thank you to BBC and to the Ivory Coast authorities. But we need more of this if we are to get CITES and governments to take meaningful action. Great apes have been ignored by CITES for several years now. The CITES Secretariat has prevented a Great Apes working group from being formed, which is the only forum in CITES where detailed evidence can be produced and discussed and where a meaningful revision to the Great Apes resolution could be made. At the 17th CITES Conference of the Parties last year, CITES even reneged on its own Decision to devise a special reporting system for illegal great ape trade. They effectively killed it.

In the BBC documentary film Scanlon tried to convince viewers that traffickers forge the permits. This happens in some cases, but more commonly national CITES offices issue them in return for bribes.

To put a huge damper on the illegal trade CITES needs to revise the Great Ape resolution to recommend that Parties (which are countries that have ratified the Convention) require that any facility or individual that possesses great apes shall obtain a government permit to do so, fill out a registration form reporting details of the ages and sexes, and update the registration annually. Each Party will submit an annual report summarizing the total registered great apes to CITES to be included in the reporting on the Great Ape resolution (Res. Conf. 13.4 Rev) at Standing Committees and Conferences of the Parties.

Currently, ape babies are shipped illegally and once in a country the traffickers move them from facility to facility to lose the paper trail (or the fact that one does not exist). Documents can be fabricated or bought through bribery that bestow legal possession of the ape victims. If permitting and registration are required upon arrival in a country, it makes it much more difficult to fiddle the paperwork – and where are the CITES permits on arrival? They should be produced upon registration.

There is also a well-developed practice of corrupt CITES officials selling fraudulent permits, indicating that the ape babies were bred in captivity and are to be used for educational or scientific purposes. If importers were required to obtain a domestic permit and register the infants on arrival these fraudulent permits could be spotted immediately. Please sign our petition requesting CITES to control the use of these fraudulent permits.

These control actions are not unreasonable. CITES has already required even more sweeping actions and reporting than proposed above under Res. Conf. 10.10 concerning elephants and ivory. Several countries have even been compelled to formulate and report on national action plans to address poaching and ivory trafficking. Don’t Great Apes deserve something similar?

Two infant orangutans turned up recently at the Phuket Zoo in Thailand.

The enclosure where the orangutans are being exploited as photo props has posted documents claiming that they were born in Bangkok’s notorious Safari World, which twice has had its illegal entertainer orangutans seized and returned to Indonesia. Being born there makes them legal? How the Thai authorities can allow this is inexplicable.

Let’s hope that this new found interest in our closest biological relatives does not fade away.

Both Mr. Shukman and Will Travers of Born Free offered to help find Nemley Junior a sanctuary. He is currently in the Abidjan Zoo, an unpleasant place for a chimp to spend the rest of its life. If the Ivoirian authorities are agreeable, PEGAS offers to bring Nemley Junior to Sweetwaters Chimpanzee Sanctuary on Ol Pejeta Conservancy, a paradise for abused chimpanzees.

The Abidjan Zoo is an unpleasant environment for a chimp. Will Nemley Junior spend the rest of his life here?

Or here at Sweetwaters, living in the African bush with other chimps?