Anatomy of a Sting: Postscript

Tom, Joe and all the rest of the wildlife traffickers who use social media platforms to market nature’s bounty are still out there, operating almost with impunity. U.S. law gives Facebook, Instagram, WhatsApp and all of the other Internet service providers immunity from responsibility for whatever third-party users post, even if it breaks the law, because of Section 230 in the Communications Decency Act.

A compounding problem to putting a stop to the rape of nature that exotic pet trade epitomizes is the fact that most countries consider wildlife crime relatively unimportant. Even though the Royal Thai Police put a lot of effort into pulling off the Kid Op sting, the prosecutor’s office apparently did not think the case important enough to investigate further and gather all the evidence needed for a court case. For example, who was “Joe” at Samutprakarn, who supposedly owned the orangutan infants?

Samutprakarn Crocodile Farm & Zoo, not far from Bangkok, is a horror show of abused animals, including an endless string of baby orangutans, chimpanzees and tigers that pass through there, used as photo props and for degrading performances for fee-paying visitors. There are several similar facilities in Thailand that rake in money from the suffering of wildlife, most of which originate in the wild from criminal capture. Were the ‘kids’ held at Samutprakarn from the time they arrived in the Bangkok area up to their seizure in the sting of 21st December? We will probably never know. 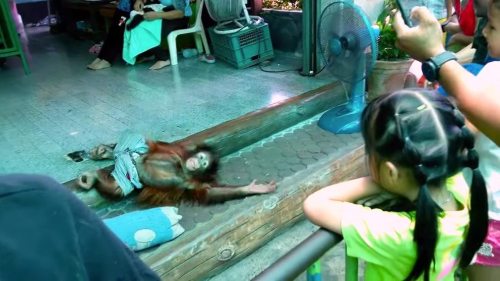 The seized kids were named Nobita and Shizuka and are still, three years after their seizure, being held at the Khao Prathap Chang Wildlife Breeding Centre in Ratchaburi province. At the time of the sting funds were available for their repatriation to Sumatra, where they were originally captured, but three years later those funds are gone. I was repeatedly told they could be relocated to a sanctuary when the case was closed. There never was a case. 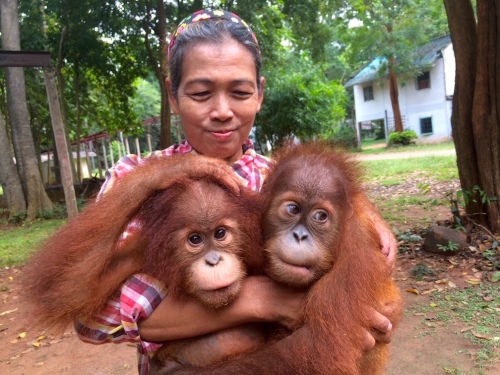 Nobita and Shizuka are still at the Thai government facility three years after their seizure. (Photo courtesy of Edwin Wiek)